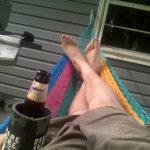 So when I’m left to my own devices, I either get myself into trouble or I do productive things. Tonight, it happens to be productive things. In between the raindrops, I put nearly all of my flowers outside. After that … END_OF_DOCUMENT_TOKEN_TO_BE_REPLACED

When I got home on Friday my head was killing me, my eye was really bothering me, and I was pretty close to beatÂ  I think the long work week coupled with being out every night, and the lack of … END_OF_DOCUMENT_TOKEN_TO_BE_REPLACED

It has been a busy couple of weeks so I’ve not really had the chance to do more frequent updates.Â  So here is a week in review of the past 8 days or so.Â  Most importantly, it would seem that … END_OF_DOCUMENT_TOKEN_TO_BE_REPLACED