So when I’m left to my own devices, I either get myself into trouble or I do productive things. Tonight, it happens to be productive things. In between the raindrops, I put nearly all of my flowers outside. After that I was in a baking mood, so I made some focaccia. As you can see from below, I was also able to use the big cast iron skillet, which is always a plus. 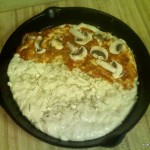 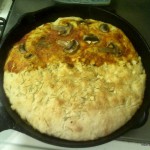 It was a actually a whole lot easier than I thought it would be. The recipe only called for rosemary and parmesan cheese, but I just had to experiment a bit with some sauce and mushrooms that I had here at the house.
Using things from the house has been a bit of a priory for me, as the pantry is FULL. One of the things I’ve decided that I need to do is limit my food store purchases to to only protein type items for a while. This will not only help me clean out the pantry, but it will also help me save some money. When I goto the food store, I always want to get a luxury item or two, so those are gone too. Although I do have a good supply of TVP and other various soy products in the house.